When the guns have ceased to thunder and the cruel war is done,
And the story told of nations and what each has lost and won,
Will those who write the record ever pause to note the loss
Of the many thousand heroes who did not get the cross?

The 11th Battalion, raised in Western Australia within weeks of Great Britain’s declaration of war in August 1914, arrived in Egypt in December 1914 to prepare for the Gallipoli campaign. 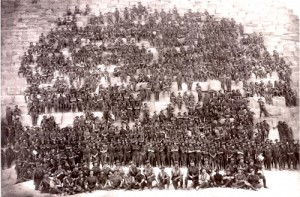 On Sunday, January 10, 1915, Captain Barnes recorded in a letter to his mother: 'After Church this morning the whole Battalion was marched up to the Pyramid (Old Cheops) and we had a photo took or at least several of them.' Most of the 704 men who posed for this iconic image have never been named / identified and it is likely that this is the last photograph of many of them, Captain Barnes included. He was killed in the Dardanelles on 28th April, 1915.

The idea for the project came as a result of the donation of a print of the Cheops image which is now framed and hanging in the WAGS Library, coupled with a desire to expand the work of the late Allan Ellam who, in the 1980s, commenced a similar project. The WAGS Webmaster, Chris Loudon divided a digital copy of the photograph into grids and numbered each man, thereby enabling their features to be enlarged and their position in the image to be easily identified. As a result, it is hoped to identify as many of the men in the photo as possible by 10 January 2015, the centenary of the day on which the photograph was taken.

In addition, the site will record the stories and honour the sacrifices made by all of the men of the 11th, not just those that appear in the Cheops photo.

For a close up detail of the image, please refer to the Photo ID & Grid page. Smaller snips of the grid will be available on individual post pages (see Recent Posts menu on the left). Individual names may be searched in the Surname & Select Category drop down, as well as via the Search box. ID #’s and Grid References are also shown in the Grids, ID's & Posts box on the left, click on the required reference to access that item.

Information compiled by Allan and Raye Ellam relevant to this project has been generously supplied by the custodians of the Ellam-Innes collection, the Princess Royal Fortress Military Museum, Albany, Western Australia. WAGS gratefully acknowledges the cooperation and assistance provided by the Museum’s Curator, David Theodore.

Can you identify any man featured in the photo and provide details of their service? By providing this information as well as any additional photographs, you will help us reach our goal of naming as many men as possible by the target date in January, 2015.

This project will continue beyond 2015. We will no doubt increase our collective knowledge of the men of the 11th Battalion, and hopefully provide a name to those soldier who are in the Cheops photo.

Please refer to the Photo ID & Grid page to determine the photo ID number for a soldier of interest, and refer to that ID number and the grid square reference number in which the number appears, in any correspondence.

Please email details to Chris or Julie at: This email address is being protected from spambots. You need JavaScript enabled to view it.

Martin, Julie - "Exploring the context - a ghost of a moment in time" - Western Ancestor March 2015