Given the support that the Australian political leaders had expressed to the United Kingdom in the lead up to the war declaration, being a part of the Commonwealth, the general attitude among the majority of those who now called Australia home as being part of Great Britain, the broad acceptance by the Australian population that 20,000 troops would be supplied, the able bodied men now rushed to enlist.

The State Military Commandant (Colonel Kyngdon) and his staff officers, headed by Major Hunt, D.A.A.G. and Q.M.G., have been working at high pressure, since Sunday last at the military headquarters in Francis-street, in connection with the partial mobilisation of the local troops. Ever since the possibility of war was apparent, and even before the mobilisation orders were issued, official inquiries were made as to the number of horses available for service in the event of rapid and effective transport becoming a pressing necessity. Naturally the investigations of the authorities have not been confined to that item alone, but have been directed to other of the many branches of an army's requirements.

In short, no stone is being left "unturned to make certain that every precaution possible is taken to ensure the smooth working of the military movements. Numerous applications are being received daily as headquarters as well as else where, from persons desirous of volunteering for service. Included among these are many reserve officers of the British military forces, who display an anxiety to know whether they should go home or wait for orders, and others, who have been connected with the military forces from time to time are also desirous of placing their services at the disposal of the Military Department.

To each, however, the authorities have had to make the same intimation to the effect that no orders have been received from Melbourne to enlist anybody. Yesterday the first real evidence of the immediate concern of Western Australia in hostilities was placed before the public, when it was announced that mobilisation orders had been issued. The first intimation was conveyed by Major Hunt, who in formed a "West Australian" representative yesterday morning that the mobilisation of 726 men for the defence of Fremantle was being proceeded with and would be completed by to-day. Last night the Commandant (Col. Kyngdon) stated that the mobilisation was proceeding satisfactorily, and that in all about 800 men would be under arms by this evening. Of these, 726 would be encamped at the Recreation Reserve at Fremantle. He had been at Fremantle during the day and had selected the reserve as the most suitable site for the camp. The municipal authorities had readily agreed to place the area in question at the disposal of the Military Department, and the work of the officers in charge would be carried out under more comfortable circumstances than would otherwise have been the case in consequence of an offer made by the Fremantle Bowling Club of one of their rooms as an office. 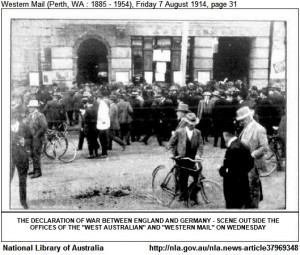 The Fremantle defence force would comprise the 11th Garrison Artillery, the 35th Engineers, the 86th Infantry, certain details from the 22nd Army Medical Corps and B section of the 22nd Ambulance Corps. Colonel Battye, officer commanding the 86th Infantry, would be in charge of the Fremantle forces, with Major Hurst, R.A.G.A., as fire commander in charge of the forts. The 86th Infantry was composed of sections from Collie, Bunbury (with detachments from Greenbushes and Bridgetown), Subiaco, Claremont, Cottesloe, Leederville, and Fremantle. In addition to the Fremantle defences Albany was to be strengthened by a company drawn from the 88th (Perth) Infantry and numbering about fifty men. The company would augment the local forces, which included a company of the 12th Garrison Artillery stationed at the southern port under the charge of Major Meeks, who would assume control of the Albany operations. Bunbury and Geraldton were not, for the present at least, included in the mobilisation scheme. Fremantle was now in a war stage, in military parlance."It might be mentioned that in order to be readily available day or night should any emergency arise, Colonel Kyngdon and his staff officers sleep at headquarters, which is in direct telephonic communication with Fremantle. One difficulty which confronted the Commandant yesterday was the matter of rapid transit between Perth and Fremantle should an urgent call be received. In surmounting that difficulty, the Premier (Mr. Scaddan) gave practical evidence of his intention to assist the Commonwealth Government. Upon the difficulty reaching the ears of Mr. Turvey, M.L.A., that gentleman communicated with the Premier, with the result that Mr. Scaddan promptly issued instructions to the Government garage that should a call come from the military office cars were to be placed at their disposal at once, day or night.

Collie, Aug. 5.The "A" Company, 86th Infantry Regiment, mobilised tonight under instructions from headquarters, and are leaving for Fremantle by the 6.30 train in the morning in charge of Lieutenant Niorgolin. On the men assembling the lieutenant addressed them, after which a patriotic address was delivered by the Mayor. All the men exhibited a most patriotic spirit. A great number of volunteers are also offering their services, but so far they are not required.

Recruiting officially began around the State of Western Australia on the 10th of August. Recruiting stations were established at the major towns, and there was a flood of eager young men wanting to enlist.

Whilst only the fittest were accepted in the original draft intakes, there was no trouble obtaining the required numbers. Some were knocked back on medical grounds and others for being under age (19 yrs minimum).

The small country towns in Western Australia were as fertile grounds for recruits as the major towns, as evidenced by the Western Mail newspaper of Friday 14 August 1914;

"... The chairman of the patriotic meeting held at East Kirupp recently has sent to the military office a list of 40 men for enrolment as volunteers - "willing to hold themselves in readiness to serve Great Britain where and whenever called upon." The list has been sent to the Bunbury centre to be dealt with..."

Enrollments, according to a returns report supplied to the newspaper by Major Wisdom, the assistant staff officer in charge of enrolment, was showing;

"... that the wave of patriotism which has swept over Australia has by no means diminished in Western Australia."

The table in the newspaper, as below, recorded the returns to date at Wednesday 12 August;

Nurses not slow to volunteer

"... The nurses supplied one aspect of more than ordinary interest. Throughout the day they visited the Drill Hall, singly or in small batches, to register their names as volunteers, and it was reported last night that the enrolment of nurses now totals 120..."

The first selections arrived at the training camp at Blackboy Hill, near Greenmount, some 14 miles (23Km) to the east of Perth. The permanent training staff are led by acting Commanding Office Major A. H Bridges.

On August 19 the number of men under canvas at Blackboy Hill was 1,173 just 200 men short of the full complement required for the 11th Battalion, but more were arriving which would fulfill the quota.

According to the Western Mail of Friday August 20 there were;

On 21 August permanent command of the 11th Battalion is handed to Lieutenant-Colonel James Lyon Johnston, originally commanding officer of the 84th Infantry Goldfields Battalion, and was taken up upon his arrival from Kalgoorlie on the 24th.

Life goes on in Western Australia

Whilst there was frenetic activity to get soldiers ready for the battle ahead, at Subiaco Oval on Saturday, August 8 1914, a different battle was underway.

A visiting team from Norwood, South Australia (17.13) defeated a much depleted East Fremantle football club (17.10) in a somewhat less than exciting match, according to the Western Mail of 14 August 1914.