"I feel very sad for my great grandmother"

George William Brown, a blacksmith by trade, was born and raised in Albany. The eldest in a family of five girls and four boys, his father operated a tug boat in Albany Harbour. George was 21 when he enlisted in September 1914 and prior to that, had been a cadet for two years. George underwent initial training at Blackboy Hill and sailed from Fremantle to the Middle East with the first contingent from Australia.

On Sunday 10th January, he was photographed with his comrades high up on the Great Pyramid with his drum around his neck. It would have been a tough climb for a man with a drum! A likeable chap, he was known as “Brownie” by his mates.

George’s younger brother Edward, followed him in January 1915. Edward was 20 and a farm labourer when he joined the 10th Light Horse Regiment. He was stationed in Cairo prior to embarking for Gallipoli. It is a matter of speculation whether the brothers were able to meet and spend some time together.

George & Edward were both in the landing at Gallipoli. Edward suffered gunshot wounds to his right hand, left shoulder and left ear on 29th May 1915. The injuries must have 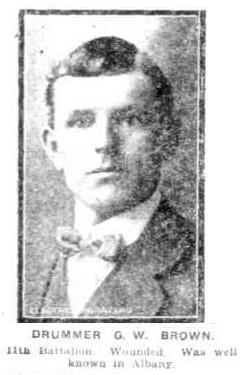 been significant, as it would be March 1916 before he was discharged back to duty. He was evacuated to Malta and then on to Edgebaston in UK.

George received a gunshot wound to the shoulder in June 1915 and was evacuated to Lemnos and then onward to hospitals in Alexandria. In November 1915 he re-joined his unit and in February 1916 he was promoted to Corporal. The 11th Battalion was sent to France and it was here George was wounded again and received treatment at Bristol Hospital in July 1916. George met a nurse, Mabel Skeates, who was working at the hospital in Bristol. They married on Boxing Day December 1916.

In the meantime, Edward was attached to 1st Field Squad Engineers as a Driver in July 1916. Following a minor AWOL incident in September 1916, he was fined and returned to his unit. In March 1917 he was back in Egypt at Dair El Belah.

George and Mabel welcomed a son, Geoffrey William (left), on 23rd September 1917. George’s record shows a charge of insubordination on 17th September 1917 for which he received a fine – docked 13 day’s pay. He could ill afford any loss of income with his wife about to give birth the following week. It was possible that he asked for leave and wasn’t happy with the response.

The 11th Battalion was fighting around Mont de Merris in May and June 1918. Records show they had taken Mont De Merris by early June and the troops were being rotated to and from the front on regular shifts. Whilst resting from action they were given hot meals, fresh underwear and entertainment in the form of concerts.

George had been promoted to Sergeant on 15th June 1918 but only a month later, on the 19th July, he was killed by a shell.

“Brown was killed with an officer near Merris by a shell… They were at Battn HQ just before daybreak waiting to go forward to the outposts. I was at the Concert by the Divvy Concert Party the night before with him, on the outskirts of Hazlebrook; he had just been promoted Sergeant from Corporal. ..”
“I saw him hit by a shell and killed instantly at Merris about midnight on the above date. He was taken back to the cemetery at Bore where he was buried by a Padre of the 3rd Brigade. We were in close support trenches at the time. He was a Sergeant and I knew him well, went to school together in Albany West Australia. He joined up before I did, but I met him again when I joined the Battalion in France. He was very popular with all the boys. He was married …”

Edward, now in the 2nd Field Squadron Engineers was promoted to Corporal in February 1918. He became seriously ill in October 1918 and died of pneumonia in a hospital in Alexandria at about the same time as he was mentioned him in despatches by General Allenby.

It is a small, well-tended cemetery of 300 graves of which two thirds are the resting places of Australians. It is located in beautiful setting - a quiet country lane overlooking fields.

I feel very sad for my Great Grandmother, who lost two of her sons in the last months of the war, but I am sure she would approve of George’s peaceful resting place in the French countryside. 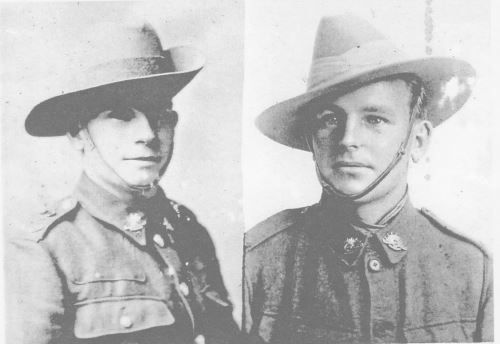 They went with songs to the battle, they were young.
Straight of limb, true of eyes, steady and aglow.
They were staunch to the end against odds uncounted,
They fell with their faces to the foe.

Our thanks to Gail Speedie for her tribute to her great uncles, George & Edward Brown.