The majority of this growth was due to the Gold Rush, with migration mainly from the Eastern Australian States but with increasing numbers coming from overseas.

The government assisted migration program saw an influx of British migrants in the 10 years prior to 1914, with some 55,000 new arrivals.

1914 commenced with a federal Liberal Government with a majority of just one seat in the House of Representatives; 38 seats v's the Australian Labour Party with 37 seats. The Senate position was worse with the Liberals in a minority. 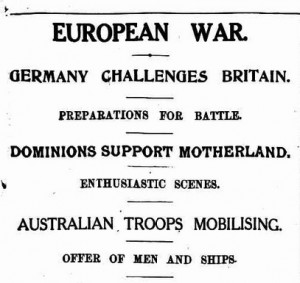 The Liberal leader and Prime Minister Joseph Cook, was clearly frustrated with the problems that this situation posed and had persuaded the Governor General, Sir Ronald Crauford Munro Ferguson, that an election should be held.

Parliament was prorogued with the election to be held in late July. Consequently the Australian Parliament was not in session when Archduke Ferdinand was assassinated, nor when Britain declared war on Germany.

The majority of the parliamentarians were in election mode, and half of the cabinet (5 of the 10 members) were not available for crisis meetings to decide the Australian response, and contribution to the war effort.

The cabinet declaration that Australia would provide an infantry force of 20,000 volunteers, at no cost to Britain, led to the establishment of the A.I.F., and the subsequent recruitment of over 300,000 men.

The federal election was held on 5 September and resulted in an overwhelming victory for the ALP. The lower house returned 42 Labour members to 32 Liberals, and the Senate was 31 ALP and 5 Liberals.

The new Prime Minister Andrew Fisher, for all of his pre-election rhetoric including his oft quoted commitment to the mother country, was subsumed by the task. He resigned and Prime Ministership was handed over to William Morris (Billy) Hughes in October 1915. Fisher was appointed as the Australian High Commissioner in London.