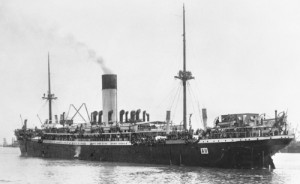 They then spent 2 days at anchor in Gage Roads waiting for their escort ships, and the main convey who were preparing to sail from Albany. HIJMS Ibuki steamed by on the evening of 31 October on her way south and returned 2 days later with other escorts, including HMAS Sydney and HMAS Melbourne.

Departing Fremantle anchorage on 2 November the Ascanius and Medic joined the main convoy at sea on 3 November 1914.

On embarkation the 11th Battalion compliment was 1,025 men, being 32 Officers and 993 other ranks, these were distributed as per the following table:

The Ascanius arrived at Port Said, Egypt on 2 December 1914, proceeding through the Suez Canal arriving at Alexandria on 5 December where they disembarked on 6 December. The troops entrained for Cairo, proceeded to Giza and marched into Mena Camp site on the evening of the 6th and proceeded to set up their camp on the 7th. The Medic arrived at Alexandria on the 13th and the troops proceeded to Mena to join the rest of their Battalion. Training commenced soon after their arrival.

(i) A.A.M.C. = Australian Army Medical Corps. There were two deaths at sea en-route to Egypt;
(ii) Private Frederick COURTNEY (21) from "A" Company died of pneumonia on 10 November 1914 on board the Medic, and
(iii) Private Charles William POWER (821) from "G" Company died the following day, 11 November on board the Ascanius, also of pneumonia.
(iv) 253 / 1093 Sgt. George Joseph BOYLE was discharged prior to embarkation on 29/30 October 1914. Boyle was re-enlisted on the high seas on board the Ascanius on 6 November 2014 enroute to Egypt. This was initially with the 10th Battalion but he was immediately transferred to the 11th Battalion. His re-enlistment brought the strength of B Company up to 117 (116 men of B Company were on the Medic). With the addition of BOYLE the total number of men on departure is 1025, and arrival in Egypt is 1023.

The nominal rolls are showing the whole Battalion as departing on the Ascanius.

We have used the Unit Diary entry which records the split as per the 1st paragraph on this page.