Beresford (Berry) Everett BARDWELL enlisted early in Geraldton, and on arrival at Blackboy Hill in August 1914 he joined the 11th Battalion A.I.F., took service number 752 and was allocated to G Company. It was then just a matter of two weeks before his previous military service saw him promoted to Lance Corporal.

He rose through the ranks to 2nd Lieutenant in the 11th Battalion, and was later appointed Captain whilst serving with the 51st Battalion on the Western Front.

Whist there we suggested that he confer with the WA Stat Library historians and provide them with the opportunity to scan the diary in his possession, which was done.

WAGS volunteers have transcribed the diary, and we now make it available to the public through this website.

Click on the Bardwell diary cover image above to view the digital copy which is available via the WA State Library website.

We would like to thank and acknowledge the Bardwell family for making their private collection available to the public, and the State Library of Western Australia for providing the opportunity to transcribe the diary. 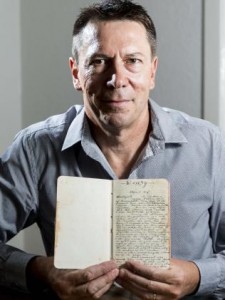 The diary of Captain BARDWELL

Lance Corporal Bardwell embarked on the Ascanius, and was amongst the first to land at Gallipoli.

His diary covers the period from mid April through to September 1915 and gives a good account of the Gallipoli landing and campaign.

Spelling and language has not been altered from the original entries in the diary.

Image here shows Lance Corporal Bardwell as he was on the day of the Khufu (Cheops) Pyramid photo, 10 Jan 1915, standing alongside his mates in the 11th Battalion. We have also added some thumbnail images of men mentioned in the diary, where known, from the Khufu Pyramid photo.