Like many other men in Western Australian in the early 1900's Joseph Eric Piercy commenced his military service by serving in the 11th Australian Regiment (Perth Regiment).

When he enlisted at Blackboy Hill in the Perth foothills on the 2nd of September 1914, 15 days shy of his 24th birthday, he had already served 3 years and 4 months in the Perth Regiment.

He was allocated as a private to the 11th Battalion, but given that he had had some previous experience under his belt, it wasn't long before he was promoted to Lance Corporal with C Company.

Eric (as he preferred to be know) was born at Magill in South Australia in 1890, the 7th child to Frederick and Emma (nee Silver). The family moved to Perth in 1894and Eric attended Guildford Primary and Perth Boys High School. He later worked with the Western Australian Government Railways in Midland as a pattern maker and mechanical engineer in the locomotive department.

Whilst in Mena Camp, about a month after being photographed on the Great Pyramid with his Battalion, Eric contracted pneumonia. He spent time in No. 2 Australian General Hospital in Cairo prior to being transferred to Helioplis and then to the Bombay Presidency Hospital in Alexandria. Spending almost a month recovering he was discharged back to his battalion on 20 March 1915.

C Company was among the first to land on the beaches at Gallipoli, and Eric Piercy was one of those wounded on the first day suffering a gun shot wound to the left leg. He was evacuated to Malta, and then on to England where he spent some time in the Military Hospital at Fulham and then to the Monte Vidio Camp at Weymouth.

Having decided that a few days R & R could be a good thing whilst at Weymouth, he was stripped of his Lance Corporal's stripes, and rewarded with 21 days detention by the camp commander for being AWOL for 5 days.

He returned to rejoin his unit in December 1915 and found himself serving with the 16th Battalion in February 1916. There was a number of men from the 11th Battalion in the 16th, but many more were killed in the action at the Dardanelles while he was recuperating from his own wounds in England.

Both Battalions had suffered heavy losses in the Gallipoli campaign. It wasn't long before he regained his Lance Corporal's stripes in March whilst the battalion was in Egypt just prior to embarking for the battle fields of France. 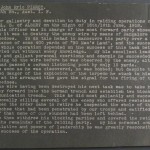 Suffering an accidental wound to his hand (which turned septic) sustained from a bomb while instructing troops at a training school in the Armentières Sector in the north of France in late May, Piercy was out of action again for 20 days.

Having rejoined his unit in late June, he was once again wounded in action in July with gun shot wounds to the face and neck, and sent to England for treatment and recuperation, this time to the Beaufort War Hospital at Bristol. He returned to strength in December 1916, had furlough in January 1917 and passed out of Officer Training as a Second Lieutenant in February, proceeding to action in France.

Like many of his fellow soldiers struggling with the vagaries of a European winter in the mud and severe cold of the Western Front during the early part of 1917, Eric spend additional time in hospital on more than one occasion due to influenza.

... By his personal courage, initiative and powers of leadership he was greatly responsible for the success of the operation.

He was further wounded suffering a gun shot to the right knee in August 1918. Piercy remained in England until early 1919 and returned to Australia after his service with the A.I.F. was terminated in May 1919.

On his return to Australia Eric pursued several vocations, including that of licensee of the Vasse Hotel in Busselton. Whilst licensee, Eric's new wife Phyllis Enid Pearl Cook joined him there shortly after their marriage in March 1938, they spent several years in Busselton.

In 1940 Eric Piercy re-enlisted for army service, issued with Service number W244159 and appointed Lieutenant he was promoted to Captain in 1942.

Serving for the full duration of World War Two, he spent the majority of his service with Army Intelligence in the Western Command area; he was seconded to the special "Z" force unit in August 1945 and spent some time in Broome Western Australia on secondment to the RAAF.

The National Archives of Australia - Service records for JE Piercy