Memories of many a dawn on the heights of Gallipoli...

On 25 April 1915, Wally Goodlet of the 11th Battalion, only days out of his teens, was one of the first West Australian boys to land at Gallipoli.

Some twenty years later, after constant pressuring from his eldest son, he wrote of the landing and of seeing his closest friend Robbo die in his arms even as his platoon was disembarking from the destroyer to the craft which would carry them to that fatal shore.

"There was a smack behind me, a gurgling cry and poor Robbo fell on top of me spewing blood all over me.

He grabbed at me to save himself but missed and slide sideways to the deck. I dropped beside him in a moment but it was apparent even to my inexperienced eye that Robbo, that grand old soldier and adventurer, had fought his last battle. His right arm was shattered and the bullet had entered his side high up.

As I knelt over him peering anxiously into his face, he opened his eyes and tried to speak; his lips framed the words but no sound came. He squeezed my hand with his left hand and I had lost the best friend a man ever had".

During the following three years, Wally endured and absorbed the horrors of war and these horrors stayed with him for life.

He rarely spoke of his war time experiences and for many years avoided all contact with the members of his battalion. Memories haunted him and when an opportunity arose for veterans to visit Gallipoli, he vehemently refused to go.

Wally attended the Anzac Dawn Service from its inception and began marching in Perth Anzac Day marches when his grandchildren were old enough to watch him from the sidelines. However, once the service on the foreshore was over he would return home and join his wife Ivy and his son, Wally Jnr on the front veranda of their home, share a beer and watch the grand children playing nearby.

It wasn’t until he’d been marching for many years that Wally finally revealed that he was marching in memory of mates who had not come home. This became very important to him and he would march even when his health was poor. His wife Ivy would run alongside the marchers with a bottle of brandy in case he collapsed. No more eloquent words than those in the final paragraph of Wally’s account of the landing are needed to explain his thoughts and feelings each anniversary of that momentous landing on 25th April 1915.

"…… and that is why, standing on the heights before the monument looking across the waters of the (Swan) River below at dawn on Anzac Day, I am reminded of many a dawn on the heights of Gallipoli where I had stood lonely amongst thousands, looking across the blue Mediterranean Bay where many hundred brave members of the old brigade are resting and where Robbo, the bravest soldier of them all and the truest friend I have even known, lies, unshrouded and forgotten by the country for which he gave his life".

There was no way however that Wally Goodlet would let those horrendous years define his life. He marshalled the courage, drive and determination which saw him through the war years for the good of his family and the wider community.

Wally was one of a large family of eight children (which included five half brothers and sisters) who moved from Stawell, Victoria to the bush around Lion Mill (Mt Helena) in the 1890s. A further two sisters, Lila and Daisy, born in Bellevue, eventually completed the family group. Wally was a youngster who found school difficult and at the tender age of twelve, his mother would often send him off with a rifle to shoot rabbits for the family’s dinner.

When he was fifteen, the family moved to the Perth suburb of Maylands but Wally moved off around Western Australia looking for work. For some time he went prospecting in Kalgoorlie and also worked on the railways and when war broke out in 1914, he was in Mount Barker working as a blacksmith.

The nineteen year old Wally enlisted in the AIF on August 17, 1914 at Blackboy Hill, close to his family’s first home at Lion Mill and was assigned to the 11th Battalion.

Like many others, he saw this as an opportunity for a steady wage, a great adventure and a chance to see something of the world beyond Western Australia.

With the others of H Company, he sailed from Fremantle on HMAT Ascanius and in early December 1914 found himself at Mena Camp in Egypt undergoing further training. After a further six weeks on Lemnos Island in March-April, 1915 he was Gallipoli bound.

Although he survived the initial landing on 25th April, 1915, Wally was later wounded on two occasions on the peninsular. At the end of June he was shot in the shoulder and back and in early August a home-made bomb exploded under the trench he was in and he suffered injuries to his left hand.

In mid-October Wally was admitted to hospital for what was described on his medical record as “heart trouble and vomiting”. Three weeks later he was invalided home to Australia, the diagnosis being “mitral heart disease – pleurisy”. Rather than accept a discharge Wally agreed to help with recruitment, but found this distasteful, feeling that he was deceiving the men he was encouraging to enlist.

In January 1917 he left Australia to rejoin the 11th Battalion which was now fighting in France. On his return to his unit in France, Wally was promoted to Corporal and then a week later, to Sergeant. Wally found it impossible to wait in the trenches for almost certain death and volunteered to go on raiding parties.

As one of a small group he would cross no man’s land under cover of darkness and raid enemy trenches, taking prisoners when possible.

On the Western Front, Wally was again wounded several times. In September 1917 he was shot in the neck at Ypres and in August 1918, suffered gunshot wounds to his right leg and was sent to England to recuperate.

From there he was discharged for a second time and sent home early in 1919.

Wally and Ivy Goodlet
on their wedding day, 1920 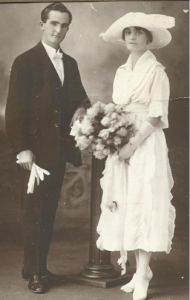 On returning to Perth, Wally married Ivy Devlin in December 1920 and qualified as an electrician, eventually setting up his own business. Wally and Ivy and their two sons, Ken and Wally Jnr. made their home in Angove Street, North Perth.

As well as astute investments in real estate in and around the Mount Lawley area, Wally became involved in the local community. He stood unsuccessfully as the endorsed Nationalist candidate for Leederville in the 1939 State election but shortly after was elected as a member of the Bayswater Road Board.

In 1940 he unsuccessfully contested the North Perth Ward of the City of Perth in Municipal elections and when the Second World War was declared, became the Head Air Raid Warden for North Perth.

The lure and freedom of the bush was always strong and Wally purchased land on the Serpentine River at Furnissdale in the 1940s. There was no road to his block and a track had to be cleared at each visit. Single-handedly, Wally cleared the block of land and built a dwelling and sheds on it for his children and later the grandchildren to use.

In the 1950s, Wally purchased a further 270 acres in Gidgegannup. Again, he cleared the bush on his own and put up fences on the sides of steep hills to keep in his flock of Merino sheep. He also cleared land close to the creek and the house for a small orchard of navel oranges and grape fruit.

One day, feeling very unwell and in a lot of pain, Wally drove himself from Gidgegannup to Perth only to find out that he had a burst appendix. Wally continued to work on the farm even after suffering a heart attack.

At the age of seventy three, he finally acknowledged that the property was too much for him and sold it to his neighbour. Within five years he had passed away. 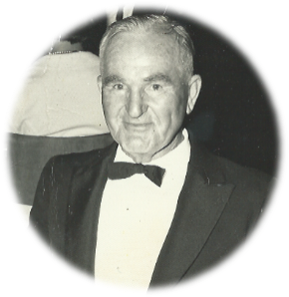 There can be no doubt that Wally was a brave, strong, capable and determined man.

He was also, as remembered by his children and grandchildren, a very caring and sensitive man, stern but fair, fiercely protective of his family with a good sense of humour. When his sons were small boys their father would ask them “who won the war?”

He would then write his service number - 909 - onto a piece of paper and hold it up in front of a mirror. He would then tell the boys to look into the mirror for the answer - “POP”.

Wally was devoted to his grandchildren and was always interested in hearing about what they had been doing and their achievements; he indulged them when possible and made them feel very special. After selling the farm at Gidgegannup, Wally concentrated his efforts on his property at Furnissdale near Mandurah. He built a canoe for his grandchildren to paddle on the river, a canoe big enough to hold several of them at a time. His granddaughter Fiona recounts…….

"As well as regularly visiting Wally and Grandma at their home in North Perth, we would visit them at their farm in Gidgegannup every second Sunday. Every Easter we would be given a letter written in tiny handwriting and covered with stickers of flowers and rabbits and other creatures. Wally would tell us that it was from Brownie Cottontail – a rabbit that he said lived on his farm. The letter would give us directions to other notes around the farm buildings and the paddocks until we came to a rabbit hole that held Easter eggs for all of us. It was magical. Wally kept that egg hunt going even after we realised that Brownie Cottontail wasn’t hiding the eggs".

Others in the family who served

Wally’s half-brother Hector McLean and his brother James Goodlet both enlisted in the army and fought on the Western Front.

Hector was killed in action at Loos, France on 27th Sept 1916 when the tunnel which he and others in his company were building was blown up by enemy charges.

James was wounded twice in action, suffered typhoid fever and in May 1918 was gassed. However, he remained on active service and was discharged in April 1919.

I have returned to these: the farm, and the kindly bush, and the young calves lowing;
But all that my mind sees is a quaking bog in a mist - stark, snapped trees,
And the dark Somme flowing.

We are very grateful to Fiona Curtis (nee Goodlet) for generously sharing her grandfather's story and her memories of him with us.