Always charge sideways – there is less to shoot at!

Calm before the storm

Bryant family legend has it that as a teenager, Robert, or Bob as he preferred to be called, rode his bicycle from Mount Magnet to Perth (a distance of almost 600 kms) to watch a cricket match. There’s a strong possibility that the story is true. Bob was known for his determination, his strength of character and love of sport and physical challenges, traits he constantly exhibited throughout his life.

Robert Ford Bryant, named for his Cornish paternal grandfather, arrived in 1897 as a four year old at the Western Australian gold mining town of Mount Magnet. He’d made the long journey from the Victorian goldfields with his parents John and Emily and two older sisters, Florence and Eileen.  Mount Magnet, located in the heart of the Gascoyne-Murchison region of Western Australia was growing rapidly after the discovery of gold in the area in 1891 and the services of his accountant father were in high demand.

As the first decade of the 20th century drew to a close, the Bryant family moved to the Perth suburb of Claremont, (known at the time as Osborne) and Bob began his apprenticeship as a fitter at the Government Railway Workshops in Midland. He also joined the 11th A.I.R (Reserve). 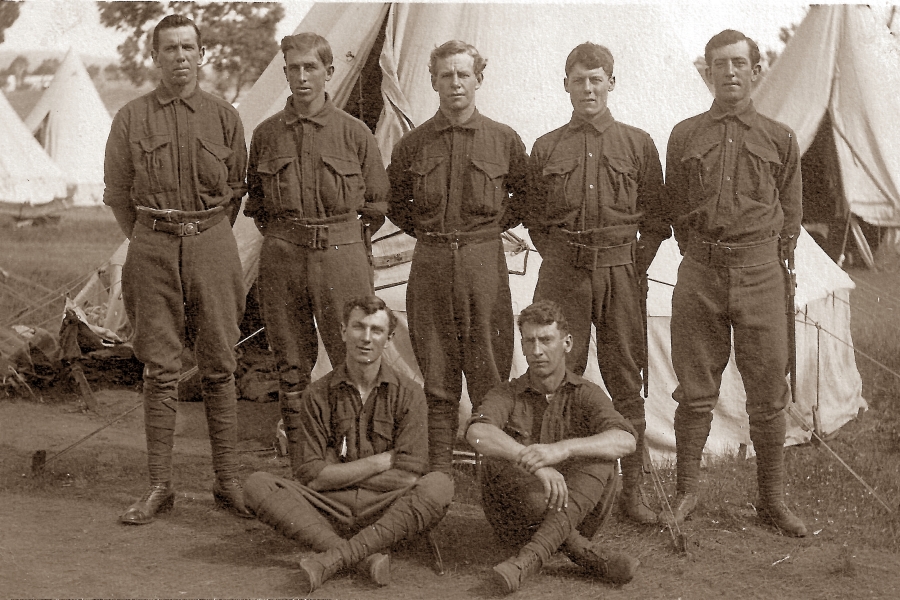 This latter decision, combined with his athleticism and capacity for hard work guaranteed his selection in the first Australian Expeditionary Force when war was declared in August 1914.  Bob stated many times later in life that he thought joining up would be ‘the adventure of a lifetime’.

Over the next few months, he and his fellow 11th Battalion troops underwent training at Blackboy Hill east of Perth. In October 1914, as a private with service number 271 and along with his best mates Alf Smith and Roy Brown, he boarded HMAT A11 Ascanius and set sail for a destination unknown.

The adventure of a lifetime

We were informed that Cairo was our destination – it was received with mixed feelings as we were looking forward to see England.

Bob’s first Christmas away from home was spent at Mena Camp situated in the shadow of the Pyramids, a few miles out of Cairo.

When January 1915 arrived, the men of the 11th Battalion were developing their strength and skills in the desert climate as well as arranging themselves on the 10th January to be photographed on the Great Pyramid of Cheops. Little did he know then, that sitting across from him on the pyramid was William Guy Thomas (Sern 240) whose yet-to-be-born son, Charles would marry Bob’s yet-to-be-born daughter, Noreen some thirty two years later, thus re-uniting these two men.

After three months training in Egypt, the 11th Battalion shipped out for the island of Lemnos off the Turkish coast to prepare for the assault on Gallipoli on 25th April 1915.

Of that fateful day, Bob would later recount that, as their landing boat was being towed to shore by a steam powered tender, the boiler on the tender alongside his line of boats blew up, alerting the Turks to their presence and giving the “game away”.

During that morning, he and his fellow troops made it all the way to the top of the cliff and could see Turkish defenders gathering on the plains.  However, they were ordered to return to the lines as they had gone too far, and in doing so, were shot at by their own troops.

There’s no doubt that the experience of war was a great teacher. Bob told his grandsons

never get promoted as they shoot officers first….

always charge sideways - there is less to shoot at....

Life on the Gallipoli peninsula was horrendous.  Bob’s best mate Alf, was killed in action and, as was true for many of the men living on “bully beef” and contaminated water in unsanitary conditions, he contracted influenza, diarrhoea and enteritis and was hospitalised on Lemnos Island in late August. His condition was so poor that he was returned to Egypt to convalesce. He was later invalided back to Australia in November 1915 to regain his strength.
Bob’s ‘adventure of a lifetime’ however was not finished. As a member of the 11th Battalion, he attended the first Anzac Anniversary luncheon on 25th April 1916, held by the Soldiers Welcome Committee in the Perth Town Hall before being officially discharged four days later.

Then, with his customary determination and sense of duty, he re-enlisted and returned to active service in June 1916 as a member of the 44th Battalion, (Ser# 93) sailing on A29 Suevid, destined for the Western Front.

The next four years proved to be as hellish as those at Gallipoli and it was to be almost a year after the signing of the Armistice in November 1918 before Bob saw the familiar outlet of the Swan River at Fremantle come into view.  As he later disclosed to his family, on one occasion in France, his entire battalion of 1000 men headed to the Western Front and returned a few days later with only 185 men left uninjured.

A return to civilian life

Bob reluctantly returned to the Midland Workshops. Many of those who had been junior to him before he left Australia in 1914 were now his superiors and it was a bitter pill. Nevertheless, he stuck it out and sport and the community of Bassendean became his focus, where he and his bride Violet Thompson and their three children made their home.

In late March of 1942, Bob enlisted for the third time, this time as a Corporal in the 1st Battalion Volunteer Defence Corps. He was to later become a Life Member of the Bassendean-Guildford RSL Sub Branch.

After his return from Europe, Bob, a strong swimmer, joined the Guildford and District Amateur Swimming Club and competed in several of the two mile Swim through Guildford competitions. In the 1922 event he was given the maximum handicap of 15 minutes.

He also enjoyed Bowls and was a Foundation and Life Member of the Bassendean Bowling Club.  For many years, in his capacity as Secretary/Treasurer, he would carry the Club’s daily takings home in the evening via the pedestrian subway under the railway to his home on Railway parade.

But football was always his greatest sporting love. He was a masseur for both the senior and junior players of the Swan Districts Football Club from the Club’s inception, held many committee positions and in later years became responsible for looking after the personal effects of the players.

Bob supported the Club in every possible way. He put his skills to great use making and painting hundreds of plywood cut-outs of the Swan Districts Football Club logo (a football with either one or two rampant swans) and sold them to raise funds for the Junior Football team. His efforts were rewarded when he was named on one occasion as the National Junior Football Supporter of the Year.

An offshoot of his work at Swan Districts was his appointment as masseur to several English competitors in the 1962 Commonwealth Games held in Perth. He was very proud of that honour and recognition.

Violet passed away in 1978 at the age of seventy nine and Bob lived on for a further nine years. Together they were legendary in the Bassendean area for their personal support and care of anyone in need. Bob was described as a true gentleman, a great and loving character and he and Vi as tireless workers for the Bassendean community.

It was however, members of his beloved football club who summed up Bob’s life in a poem appearing on the final page of a booklet produced by the Swan Districts Football Club in 1984. The poem outlined Bob’s loyalty to the Club but it could very well be describing his service and loyalty to his country, his community and his family.

In the words of one of his relatives …… Bob was a beaut bloke. 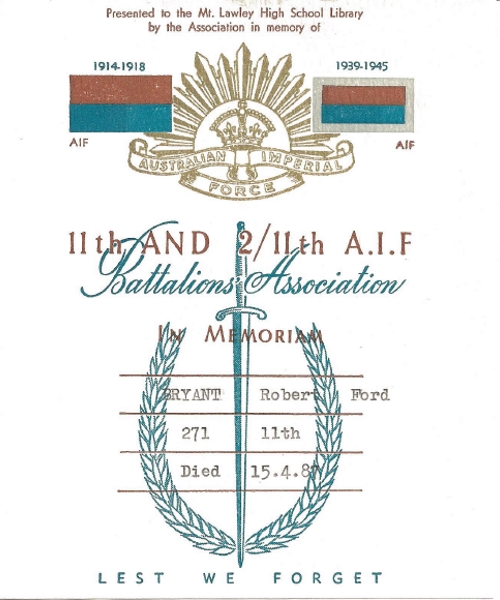 He gave till he could give no more.

He showed us the way
Fair dinkum men play
He set standards for which we should strive
He showed how to toil
And always be loyal
And backed it with faith, power and drive.

Right from the start
He gave us his heart
His love, his pride and devotion
Fifty years with Mob
We say thank you Bob
And we do it with deep felt emotion.

Our gratitude and thanks to Bob Thomas, Colin Slattery and Robin Faulkner for sharing their memories of and stories about Bob as well as providing digital images.  Special thanks to Bob Thomas for his hospitality and generosity in lending original photographs for copying.

The Swan: 50 years on. Produced in conjunction with the video presentation commemorating fifty historic years of the Swan Districts Football Club