He talked about his war service, but never with regret.

My father, Paul McInerney, was a strong personality and a dominant force in my life.

To this day I can recall the sound of his voice, the stories he told, the words he used, and remember the views he expressed and the values he held. His was a life full of varied experiences which he enjoyed with vigour and enthusiasm.

The most significant was probably the day he enlisted in the AIF at the age of nineteen participating in the landing at Gallipoli, serving in France and ending the war a Lieutenant.

He talked about the past including his war service, but never with regret.

He would joke about growing two inches at Gallipoli through sheer fright. He was a man who took responsibility for his actions whatever the outcome. He was never nostalgic about the past, always interested in the future and ready to face whatever that might bring - one of his most admirable character traits.

Paul was born in South Australia in 1895 where his birth was registered in Adelaide, his father’s occupation listed as “teacher”. However, the family also spent time in Kapunda, South Australia, at that time a tin mining town and also Cobar, New South Wales where his father, no longer a teacher, managed the Great Cobar copper mine. The family moved to Kalgoorlie in 1903 where Paul grew up and his early connections with the mining industry were to continue throughout his life, including a short period working underground in Kalgoorlie, until he retired from managing a talc mine for the Western Mining Corporation in December 1968.

After enlistment in August 1914, Paul became a machine gunner. At that time, for a teenager barely nineteen, going overseas was a great adventure and it is unlikely that he or any of his fellows could have foreseen the reality of trench warfare.

He was wounded and became ill with typhoid in August 1915 when he was transferred to hospital in Egypt and invalided home to Western Australia in October 1915.

He was designated “Return to duty. Fit for active service” on January 27, 1916, and attended officer training courses in Tidworth, England, until posted to France in December 1917.

During World War II Paul was commissioned with the rank of Major to work in the Kimberley region of Western Australia organizing local station owners into a guerrilla force in readiness for the perceived threat of a Japanese invasion.

These are the facts of his service with the AIF and in particular the 11th Battalion but facts tell only part of the story of a man whose life was influenced in the first half of the 20th century by two world wars and the Depression.

Paul returned to Kalgoorlie after discharge in 1919, married his first wife and worked in gold mining, in the administration of South Kalgurli Consolidated Ltd. until 1930 when he joined the Burma Corporation, left Australia with his wife and daughter and lived in Burma for five years employed in the administration of a tin mine in Namtu. The skin of the tiger he shot during this time was spread on the floor of our family living room for many years.

He commenced his own business, R.P. McInerney & Co. Pty. Ltd. in Perth in the late 1930’s, building on his experience in mining to deal in the importation of parts for the mining industry which at that time was concentrated in the Goldfields of Western Australia. He maintained a branch office in Kalgoorlie for many years.

He sold the business in 1961 and joined the Western Mining Corporation as manager and director of a talc mine at Three Springs in Western Australia. 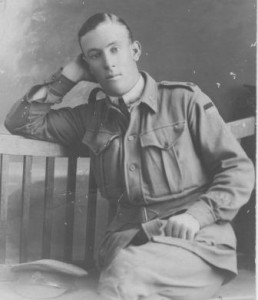 Paul valued enterprise and independence, admiring anyone who was prepared to “give it a go” whatever that might be.

He was an admirer of Menzies who seemed to offer much to many in the post WWII period. He liked listening to Parliamentary debates taking delight in the repartee which Menzies used against his opponents.

Paul belonged to an age group which used Australian slang which has largely disappeared today. He would refer to a friend or acquaintance as a “cobber”. One of his favourite words was “dinkum”. If an individual expressing an idea was “fair dinkum” he could be taken seriously, if not the idea “wasn’t worth two bob”.

I remember his response to any new friend, male or female I might intend introducing to the family. He would invariably ask about the friend’s father “What’s he do for a crust?” depending on my answer the next question, would be “What sort of a screw would he get for that?” (crust = job screw = salary).

Of course he never questioned the occupation of the friend’s mother, she would not have a job. His view was that a man supported his wife and women did not work after marriage.

He never swore, or at least not in the company of women or children and his stories of the war were not of the gruesome variety. His attitudes and manners were in many ways Edwardian; old attitudes which found it impossible to talk openly about sex, childbirth, illness especially if it were serious. His way of describing a pregnant woman was to lower his voice slightly and impart in a confiding tone “She’s in the family way.” Even in the sixties that was becoming rather quaint. He was extremely uncomfortable when I continued to work as a secretary until the sixth month of my first pregnancy in 1966.

Of course I clashed with him when a teenager and later in the sixties when feminism and other changes in attitudes were taking place.

He could not understand the protests taking place in the sixties against the Vietnam War. His view “What’s wrong with them? Don’t they want to fight” expressed his idea that there was a job to be done and that work should not be shirked.

Paul was a man who made many friends from all walks of life treating them equally in a particularly Australian way, rejecting those with pretentions to social superiority. I think that was in part, a reflection of his experience in the 11th Battalion.